Recently I had the pleasure of attending the 2018 version of Days of Atheism organized by the Kazimierz Łyszczyński Foundation in Warsaw, Poland. This was my third time at this annual event, having attended in 2015 and 2017. I have also been for several years a member of the international jury which selects the annual Atheist of the Year Prize, International Category. There is also a National Category whose winner is chosen by a Polish jury. The award ceremony was held on Saturday March 24th 2018 at the Days of Atheism banquet.

This year’s winner in the Polish National Category is Alan Wysocki, an atheist, feminist and activist for human rights, including the rights of atheists, women, sexual minorities and others.

“As an outstanding atheist, he has contributed to the expansion and consolidation of the atheist community in the US and around the world, and to changing the general perception of atheism and religion. His militant, uncompromising atheism helps people understand what religions, religious institutions and religious privileges really are: corrupt organizations that sell myths as if they were reality, in order to gain power. He managed to unite American Atheists and organize the Reason Rally in 2012, the largest gathering of atheists in history. His visit to Poland is appreciated as help for Polish atheists discriminated against by the ruling clerical-nationalist camp.”

Exceptionally this year, the jury also decided to award a prize to an organization for its outstanding contribution. The Association of Freethinkers of Tunisia (ALP Tunisie) is the first legally registered (October 25, 2017) organization of atheists in the Middle East and North Africa. The President of the Association was recently wounded in an attack on him by Islamic fundamentalists. The association received the award for:

“its courage and determination, as it is the first non-religious association in the MENA (Middle East / North Africa) region that defends the rights of atheists, religious and sexual minorities and supports feminist movements. This is an historic achievement for the atheist community in the region and a huge advance in the field of personal and intellectual freedom.”

The Foundation also awarded a special prize to the author of this blog, an unexpected and very sympathetic honour, as a way of thanking him “For continuous efforts in building international cooperation and solidarity of atheists, especially with people discriminated against or persecuted.” This award was a decision of the Kazimierz Łyszczyński Foundation, not the jury.

The Days of Atheism 2018 event began in the late afternoon of Friday, March 23rd. A panel discussion about atheism and women’s rights had been scheduled for that evening, but the organizers decided that special circumstances required a change of plans. A major demonstration was being held to protest the new anti-abortion law proposed by the right-wing catholic-nationalist Polish government. Rather than sit comfortably indoors and discuss women’s rights, why not hit the streets with thousands of others in order to fight for women’s rights?

There were an estimated 50,000 participants at the demonstration. We proceeded through the streets of central Warsaw, finally stopping for a rally before the building holding the offices of the right-wing party, Prawo i Sprawiedliwość (PiS or Law and Justice), which currently holds power in Poland. Several participants of the Days of Atheism spoke from the rally stage, including Nina Sankari of the K. Ł. Foundation, Jane Donnelly of Atheist Ireland and Victoria Gugenheim, feminist and bodypainting specialist.

The events of the next day, Saturday March 24th, began in the morning with a film about euthanasia and a panel discussion on the subject of dying with dignity with various speakers including Jean-Luc Romero and Micheline Claes. This was followed by outdoor events beginning at the Nicolas Copernicus Monument. Jamileh Nedai spoke about the resistance of Iranian woman who are throwing off the veil in defiance of the stiflingly conservative Islamist regime in Iran. Victoria Gugenheim led a performance event highlighting the plight of Polish women faced with the government’s new draconian anti-abortion legislation. 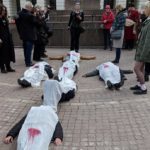 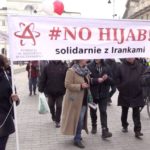 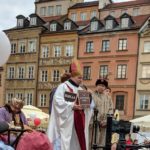 Click on an image to view it full size

Then began the annual atheist march from the Copernicus statue, through the streets of old historic Warsaw, ending in the old town square where the execution of Łyszczyński was re-enacted. Kazimierz Łyszczyński, from which the K. Ł. Foundation takes its name, was a Polish-Lithuanian nobleman and author of the treatise “DE NON EXISTENTIA DEI” (“On the Non-Existence of God”) who was executed in 1689 on charges of atheism.

The conference then re-convened indoors for a series of talks by a wide variety of individuals on the theme “We, The Atheists.” I myself gave a brief talk entitled “The Moral Necessity of Atheism” in which I explained how religions promote homophobia and misogyny and discussed the concept of legal jihad where Islamists use the language of human rights in order to fight against human rights.

However, the highlight of this series of talks was the rousing speech by David Silverman whose “firebrand atheism” is resolute and determined. He criticized and mocked the idea that there is any doubt whatsoever about the complete falsehood of god-belief. Furthermore, he emphasized the critical importance of identifying oneself by the term “atheist” rather than other wishy-washy and/or poorly understood epithets such as “humanist” or “freethinker.” Paraphrasing his message: “Because I am a true humanist, I call myself an atheist, not a humanist.” David’s highly effective and dynamic delivery and his unapologetic approach to atheism reminded us why he is Atheist of the Year 2018!

The events of Saturday were completed with the annual Atheist banquet, held that evening at a restaurant in Warwaw’s famous Pałac Kultury i Nauki (Palace of Culture and Science), during which the awards were given out.

The final day of the event, Sunday March 25th, was devoted to discussions on a variety of issues, including freedom of conscience in various countries, the Catholic Church’s iron hold on the Polish school system, the Church’s protection of sexual abusers in its midst and the Catholic threat to artistic freedom in the Polish theatre.

All in all, a highly engaging and successful Days of Atheism. And next year, Days of Atheism 2019 will celebrate the 330th anniversary of the execution of one of the most important figures in the history of atheism, Kazimierz Łyszczyński.